8 years ago I blogged about…

Of course the first thing I had to do to my new watch is customize it. Over the weekend I learned how to build my own watch face in WatchMaker1). The result is shown here: 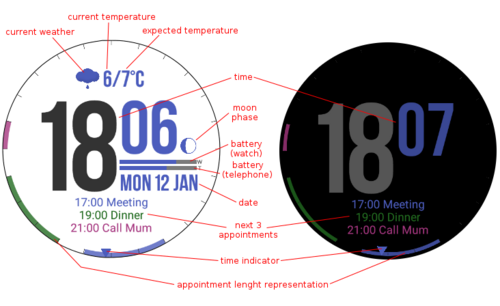 Most of the information is only shown in active mode (pictured left). I went for a white background because I assume it will be much better to read in outside. Thanks to the ugly Berlin Winter weather I had no way to test that hypothesis though

Most important to me besides the current time are my upcoming agenda items. The watch face shows them in two ways. One is a simple list of the next three appointments. The other is a representation of their length on the border of the watch.

Getting these border graphs right was the hardest part. Since appointments happen on a 24 hour day, but the circle only represents 12 hours, I had to come up with some logic to decide when there's space for the next afternoon appointment even though it's still before twelve. Took a while, but now seems to work just fine2).

Another problem I encountered in dimmed mode. I wanted to have the border graphs in dimmed mode, too. It worked just fine in Watchmaker, but once on the actual device I noticed the watch being off-center and cutting pixels. A reddit post later I found the reason: an Anti-Burn Screensaver mechanism in Android Wear.

The watch face compensates for that behavior by moving the graphs a few pixels towards the center when the display is dimmed.

The watch face is available for download from Watchmaker or FaceRepo.