The Android tablet market is not what it used to be anymore. There used to be a huge selection of tablets to choose from. But nowadays the selection is slim. When my trusty Asus' battery failed, there wasn't much choice.

Since I also was a bit short on cash1) I decided to explore the cheapest option available: Amazon's Fire series. I picked the Fire HD 8 which was 90 EUR in the recent Cyber Monday sale. 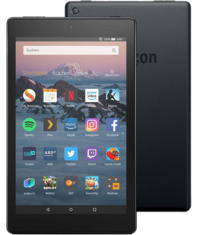 Now, Amazon's Fire tablets aren't running a proper Android OS but instead they use Amazon's derivate dubbed Fire OS. They offer their hardware cheaply because they want you to buy into their eco system. The Fire series is meant to consume Amazon Music, Amazon Prime Video, Kindle Books and of course for shopping at Amazon.

This means their default launcher is like a big shopping catalog. Oh and it does not even has the Google Apps (web search defaults to Bing).

So in the default setup, the Fire HD 8's software is a bit shit.

Luckily there are a few things you can do about it. Unfortunately the boot loader is locked, so simply replacing the system is not an option currently2). Instead workarounds are needed.

The first step should be to update the FireOS to the latest release - I had trouble with the version that came with the tablet3). The final version I set this all up with was 6.3.0.1.

Next is to install the Google Play Services and Store. Liliputing has a good explanation. You basically download the APKs from APKMirror and sideload them.

Once you have the Play Store, you can install your launcher of choice. Nova in my case.

Now, on a sane Android system you can simply switch the default launcher. Unfortunately this option is not available on FireOS. Instead a somewhat hacky workaround is needed. That workaround is called Launcher Hijack.

It's an app that registers as an accessibility helper and will intercept home button taps. As before you sideload the APK. Then you enable the app under Settings → Accessibility → To detect home button press.

Next you should be able to set which launcher you want, but the App simply crashed when I tried to open it. It turned out to be a known issue. The solution is to go to Settings → Apps & Notifications → Manage All Applications → Launcher Hijack v3 → Advanced: Display over other Apps and set it to yes. After this, the app should start and let you chose your launcher.

You may or may not need a reboot or two between those steps.

After that the home button should work as expected, opening a proper launcher. Unfortunately the Launcher Hijack has a known side effect of the Recent App switcher not working correctly. Hopefully some fix will be developed in time. Until then I use an app called Swiftly Switch to easily switch between recent apps. Not ideal but better than nothing.

Update: I tried to work with this setup for a couple of weeks, but in the end I gave up. The tablet was just too sluggish to be really useful. Luckily Amazon let me send it back even though I no longer had the original packaging. Instead I spent a bit more on a Lenovo Tab4 8 Plus and am happy with that.