With the Android Marshmallow release, Google introduced a new concept on how to work wit SD card storage.

SD card support has always been problematic on Android. It worked fine to store data, like music or photos but it didn't really work when you needed space to store new Apps. There was some support to move at least parts of an app to the SD card, but it was always a clutch. In reality it often meant that for moving a 50MB app to SD card, 25MB remained on the internal storage and 40MB ended up on the card, effectively making the app even bigger. In addition you had to manage all of this yourself for each app you installed.

Marshmallow finally promised to change that with the introduction of Adoptable Storage. It allows you to make your whole or parts of your SD card, part of your internal storage. With the OS managing it all automatically. Exactly what vendors had promised for years: “extend your storage with a SD card”.

Unfortunately the same vendors keep screwing us over. In my case Sony. While they released Marshmallow for the Xperia Z3 Compact (and other Z series models) it is missing Adoptable Storage support!

Imagine my joy when I stumbled over this post over at XDA: Enable Adoptable Storage on MM. Unfortunately the result is not exactly the same.

Following the tutorial, I tried to configure my SD card to use 50% as adoptable storage using ADB. Unfortunately I got some error messages during the first tries:

Popping in and out the SD card, triggered an error message on my phone about the SD card being corrupted, with an offer to reformat it. I did so and tried ADB again: 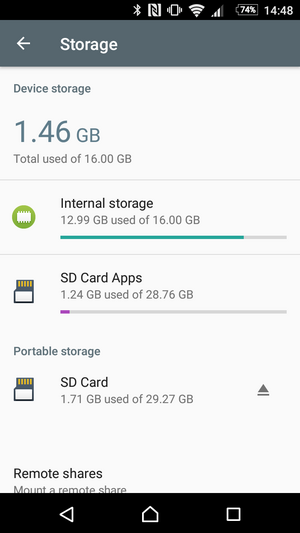 That's for 16GB internal storage and a 64GB SD card split into half.

As I said, the result is not exactly Adoptable Storage. That is, the new storage is not automatically merged with your internal storage. But you can use it to manually move apps to it. And this time they are moved completely:

Is this true Adoptable Storage? Unfortunately no. Is it better than nothing? A bit. Should Sony get their shit together and stop messing with what Google thought up? Definitely!

1)
It gets weirder when you click on the first SD card and it shows you negative space used
2)
if that button isn't there, the app can't be moved for some reason
3)
I renamed it to “SD Card Apps” under Settings/Storage - SD Card - Menu - Rename