I'm currently working on a Raspberry Pi project and that needed some soldering. But holding the Raspberry, the wire, the soldering tin and the soldering iron isn't easy with just two hands. So it was time to get a “third hand”.

However I couldn't decide which one to get. The cheap ones are super flimsy and annoying and the expensive ones are… well, expensive.

So I looked around for inspiration on how to make my own and found this video. I liked the idea of using armature wire.

Kaddi's brother also wanted one, so I took the opportunity and built two. 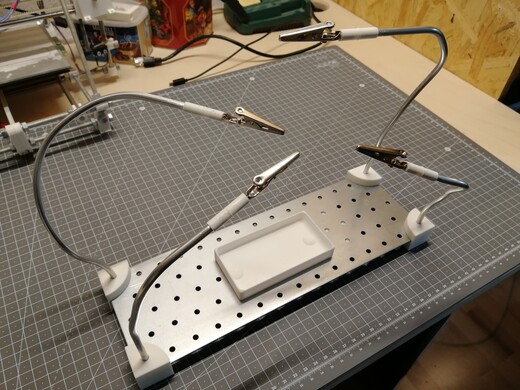 Here are the parts I used (for two):

The 50 clamps are somewhat excessive, since I only needed 8 but it was the best offer I found on Amazon. In the end the two pieces came out to about 10 EUR each. If you're patient, you can probably get it cheaper by ordering directly from China.

Unfortunately the holes in the perforated metal sheet weren't exactly the same distance from the rim in each corner. Instead of 3D printing 4 different corner pieces to match them exactly, I simply drilled them bigger to be 8mm. That gives enough clearance and the corner pieces hold the wire well enough on their own.

For connecting the alligator clamps to the wire, I tried a few different methods. I wanted to be able to rotate them, so clamping them directly to the wire wasn't good. I experimented with 3D printing ball joints, but could not get a result that worked but was also stiff enough. In the end I used simple 3D printed bushings. They are super tight on the wire but just the right tightness on the clamps to let them rotate without falling out.

The part bin in the middle is attached with two magnets and can easily be moved to a different place.