When people hear that I own a 3D printer they have questions. Usually exactly the same few. So why not answer them here?

Pictures at the very end.

How does it work?

There are different ways of 3D printing. The method used by most hobbyist printers is FDM (Fused Deposition Modeling).

The printer extrudes hot plastic in lines to form a thin layer. Once the plastic is extruded, it cools down and gets hard. The printer then prints another layer on top of the previous one until the full 3D model emerges.

Other methods use UV light to harden a liquid or use a laser to harden a powder. But those printers are usually more expensive.

How expensive is a 3D Printer? 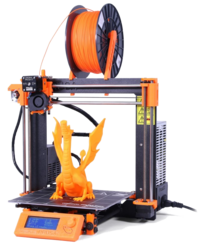 Well, my Prusa MK3 Kit cost me a bit under €800. If you don't want to assemble it yourself it's €1000. For the hobbyist category that's already the upper range, I'd say.

You can also go much cheaper. I've heard the Creality Ender 3 is a quite capable machine, if you're willing to spend the time to fine tune it. You can get one for about €250.

I wanted a hassle free printer less than €1000 and my Twitter followers agreed that that is the Prusa MK3.

The raw material is a spool of plastic. The one I use most is called PLA (Polylactic Acid). It's a bio degradable polyester made from renewable sources. It comes as 1.75mm diameter “wire” on a spool - “Filament” in 3D printer lingo.

A kilogram of PLA usually costs between 25 and 30 Euro. It is relatively brittle when hard and has a low melting point. When I need something stronger or more heat resistant, I use PETG (Polyethylene Terephthalate). It's not much more expensive than PLA.

A small model is usually just a few grams, larger models may cost you a couple of Euro.

So it's only hard plastic?

There are also flexible materials like Nylon and TPU (the stuff phone cases are often made of). And then there materials like woodfill which create objects that feel like real wood (the plastic contains real wood particles).

But those materials are harder to print and so far I haven't tried it.

PLA comes in a variety of colors. But your printer takes only one filament at a time, so your resulting object has only one color.

There's a multi material upgrade for the printer I have. It automatically switches which filament is fed to the extruder. But it needs to clean the nozzle after each change using a “sacrifice tower” next to your object, so it's pretty wasteful. The mechanism is also a bit less reliable in terms of mechanical failures. That's why I haven't bought this, yet.

In the past there have also been experiments in mixing different colors right in the hot end, but AFAIK that has not have resulted in any successful products, yet.

The much simpler way is to only switch the color for different layers. This is easy but requires changing the filament manually. And your model needs to fit into this way of coloring. Check out Kaddi's Pacman Ghost in the gallery for an example of this technique.

Finally you can of course paint the model. If you're into miniature painting, a 3D printer might be just the thing for you

Have you printed a gun, yet?

I really don't understand people's fascination with this trope. It seems to be a combination of the lack of knowledge on how 3D printing works and how guns work?

So, no I have not printed a gun. Even if it would be feasible to do that on a 3D printer (it really isn't – at least not how you imagine it) what would I want a gun for?

So please stop asking this question.

So what are you printing?

See the end of this article for a gallery of prints. In general the things I print, fall roughly intro three categories:

That's also roughly the order in which you start using a new printer. The longer you own it, the more prints fall into the last category.

How long does it take?

It depends on the model of course. The larger or more complex a model is, the longer it takes. A small thing may be done in 20 minutes. Some of my longer prints took nearly 12 hours.

But that's just the print time. And that's not that important. Though fascinating to watch, there's no reason to sit next to your printer the whole time. You just start the print and then from time to time check it's still going.

The most time is spent designing the parts you want to print.

Do you create all the 3D models yourself?

No. Luckiliy there's a huge community sharing 3D printing models. So when you need something, you first see if someone else built it already, before designing it yourself.

If you're interested in what is possible, check out Thingiverse. It's the most popular site to share models. Many of my own designs are also available on Thingiverse.

Update: Nowadays, I and many others prefer printables.com over Thingiverse. You can find all my models there now.

What software do you design in?

Personally, I often use Tinkercad - it's a very simple 3D CAD program right in the browser. It's often enough for simpler designs.

For more sophisticated stuff I actually “program” my models in OpenSCAD. It's basically sculpting with primitives, but you write code for it. Stuff like “create a cube, subtract a cylinder from it and put it on top of another cube…”. It fits the way I think of 3D objects, but may not be the most intuitive thing for non-programmers. 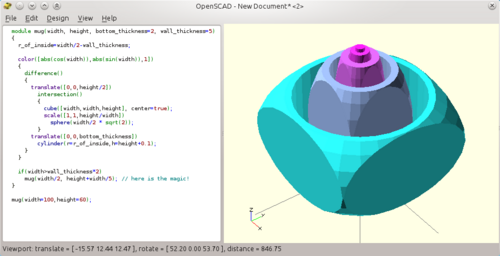 Kaddi uses Fusion 360 from Autodesk. It's a much more professional CAD tool, but totally free for personal use. The learning curve is somewhat steep, but I'm impressed by what Kaddi can do with it already. Unfortunately it's not available for Linux.

But basically you can use whatever 3D modelling tool you're familiar with. Blender, SolidWorks, whatever…

So you can just make anything with a 3D printer?

Of course there are limits. One of them is the size of the printer. You can not print objects that are larger than your printer. Just like your A4 desktop printer can't print A3. But just like with paper you can design your models in a way that you can assemble the parts into something larger later.

There are also limits inherent in the FDM technique. You obviously can't put a layer onto thin air. So large gaps or overhangs in your model are a problem. Smaller gaps can be “bridged” and overhangs up to 40 or 45 degrees are printable though.

If your gaps are larger you need supports. That means you print some thin, fragile material under the overhangs to support the real part. When the print is done, you break or cut off this support material. Sometimes it makes sense to put this support right into your model, but most of the time you simply tell your slicer to auto generate the supports for you.

Wait, what is a Slicer?

The slicer is a software that knows what printer you have. It takes the given model and “slices” it into the layers we talked about further up. It then creates a long list of commands specific to your printer. Basically just stuff like “move 1mm to the right and 2mm to the back, then extrude 1mm of plastic”.

This list of instructions is called G-code. Nearly all 3D printers use this as input. So do laser cutters and CNC machines.

You can think of the slicer as the “printer driver”. A driver with a lot of settings. 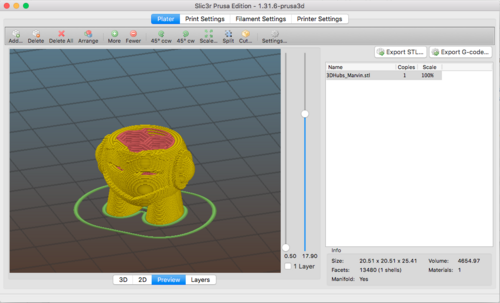 So should I get a 3D Printer?

That is a question only you can answer. If you do a lot of DIY projects already, then a 3D printer might be an excellent addition to your tool suite.

If you see yourself using one only rarely, it might be the better option to order 3D printed objects off a service on the Internet. Or maybe you can get access to a printer in a local hacker space.

Here is a small selection of things I printed on my Prusa MK3 so far: