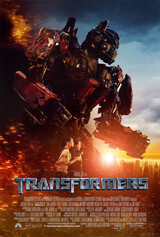 Remember my “recommendation” for Doom? Well, if you enjoyed Doom, go and see Transformers. I just came home from the cinema. It was a great evening and I laughed a lot.

The story is quickly told. There is some alien techno species, who fought for some ancient power cube back in the days on their old planet. The war destroyed the planet and the power source (a cube) went into space. So did some of the aliens. The cube crashed on earth and was later discovered by a north pole explorer in the eighteen hundreds…

Fast forward to now: The aliens are here looking for the cube. Some of the good ones, some of the bad ones. The bad ones start to wreak havoc looking for the grandson of the mentioned explorer (our hero). He is of course some unlucky kid trying to get a date with one of the hot girls.

The rest is tanks, helicopters, cars and robots mixed with weapons, explosions and full surround sound. Fighting, running, shouting, destroying things, followed by more shouting, more running and even more fighting until the bad guy is dead, the boy gets the girl and the world is saved.

See? Crappy movie. But it's really fun as long as you don't take it serious. The sound is excellent - FX and music. The effects and the 3D animations are wonderful (okay except for one scene which was really ridiculous looking). Even the dialogs are bearable

One thing that astonished me was their openness about crashing planes through office buildings. Of course they avoided images too close to resembling the 9/11 pictures but it was still pretty unexpected in an American movie…

PS: The Rotten Tomatoes reviews seem to agree with me. Half of them say it's crap, the other half think it's great fun