14 months ago I blogged about… 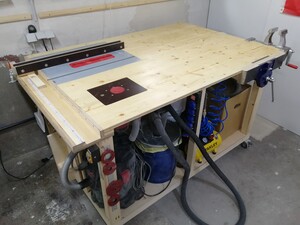 I built my main workbench nearly a year ago. It remains the most important part of my workshop and I keep improving it.

I already blogged about adding a router table and a disk sander. This blog post is about a few more upgrades I did in the last months.

My custom fence worked just fine the way I initially built it, except for one grave mistake. The wooden rail the fence attaches to was at exactly the same height as the table saw top, blocking the T-slots. This meant any accessory that needed to be slotted in from the front, did not work anymore. Not a huge deal, but annoying.

So I set out to fix that. To move the rail further down (without completely rebuilding it from scratch), the part that attaches to the workbench had to be removed. Since it was glued, that meant the use of some excessive force. The damage of which needed to be fixed, before the new part could be fitted. I glued in some thin strips of wood and sanded everything smooth again. There's only a tiny bit of a scar still visible of this operation.

With the rail moved further down, I also needed a slightly higher fence attachment. And since I was working on the fence anyway, I decided to replace it with 40×40 aluminum extrusion and laminated plywood sides.

The whole rest of the mechanism works just as before. A 45° bevel and a toggle clamp. See my original post for more details.

After a year of using it I can say that mechanism works okay but isn't super rigid. I think the end of the fence flexes about 1 to 2mm when too much pressure is applied. Not ideal but workable when you're careful.

I think it's as rigid as I can make it with a wooden construction. Maybe one day I will think of an all metal mechanism that doesn't require a welder.

Another new addition to the fence system is a self-adhesive steel tape measure and a 3D printed indicator. A simple thing that makes the saw much quicker to use.

Dog holes add versatility to a workbench by providing a mechanism to add various accessories like bench dogs, clamps or holdfasts. It is a scary thing to drill a whole bunch of holes into the bench top, but it worked out alright.

Before I even started, I glued a second 3-ply sheet under the bench, doubling its thickness from 19 to 38mm.

For drilling the holes I bought a handheld drill stand and a high quality Forstner bit.

I made a jig with 5mm holes and exact spacing first. This allowed me to pre-drill 5mm holes, using M5 machine screws to orient the jig perfectly. Once the 5mm holes were done, I reused the jig to drill the 20mm holes.

BTW. I decided to go with 20mm holes instead of 3/4 inch (19mm) ones, since the metric 20mm system seems to be more popular in Europe (its also used by Festool's MFT).

After drilling, I added a 45° chamfer with the router, sanded and oiled the holes.

For accessories I bought benchdogs and desktop clamps on AliExpress. But I also made some clamps myself using toggle clamps and standard F-clamps. For the latter I bought the cheapest one at the local hardware store, sawed off the top and replaced it with a 3D printed part.

So far I only had an aluminum bench vise attached to one corner of the bench. I “inherited” it from Kaddi's grandfather and like it a lot. Especially because it is easily detachable via large wing nuts. However it is not a wood working vise. It's relatively small and prone to damage the wood you clamp into it.

So I finally bought a wood vise. A 230mm York vise. I was surprised how large that actually is. At 16kg it is quite the monster.

To add it to the table, I first had to shim the underside for the required 90mm of thickness. To mount the vise I used threaded rods and large hex screws. Some wood caps hide the rod heads on the top of the bench again.

For the vise jaws, I used simple plywood. A hardwood might be the better option in the future, but for now, plywood will have to do.

Since I wanted to keep the bench vise for metal work, I had to rework the right side of the jaw, to make sure the handle would still be usable. Looks weird, but works.

The new vise also features a pop-up bench dog which allows for clamping large things against a bench dog in the above mentioned holes.