We're back from a two week vacation. This time we went camping - tent and all. 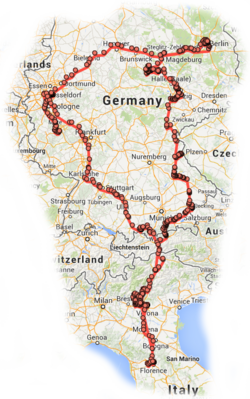 But first we visited my dad in Solingen in the West of Germany. We did a day trip together to the Mosel region for some hiking and visited Eltz Castle.

Our next stop was Bavaria where we finally saw the famous Neuschwanstein Castle. We took a hotel room there.

Our real destination was Lake Garda in Italy. But because it got late, we took a hotel room in between again. Finally we camped for a few days at La Quercia Camp Ground. The weather was excellent (except for a huge thunderstorm during the first night) and we went swimming everyday and visited the small little towns around the lake.

Until we got bored and made a trip to Verona and Florence. Both cities were really nice, even though they can't compare to Rome. Of course we needed a room near Florence, because our tent was still at the lake

When we returned to our tent at the lake, we found that the camp ground had filled up over Whitsun. To our dismay with a bunch of annoying Germans who stayed up all night playing terrible music. Maybe we're old, but that was not what we had in mind for our vacation

. So after a sleepless night we said fuck this shit and packed up.

We had seen enough of Italy for now and wanted to go up north again to camp a few more days somewhere closer to home. Our first stop was Tyrol in Austria, where we spent a night in in a nice Hotel in the mountains.

In retrospect, we should have stayed in Tyrol. It's beautiful and quiet there and it has camp grounds, too. But for some reason we had set our mind on camping at a lake somewhere in East Germany. But first another stop in a Hotel at the north of Bavaria after we visited the World's longest castle in Burghausen. Do you notice, that we kind of suck at camping?

Well, East Germany was a bad idea. Boy, was that depressing. Large areas still seem like a wasteland to me. Lots of towns in disrepair with many abandoned houses. Nice roads (thanks to generous government funding, I guess) but absolutely nothing to see. Finding a decent restaurant for lunch proved to be hard. Even the weather had gotten worse.

So we arrived in a bad mood at a camp ground near Leipzig. We had a look at it but our mood did not improve. Sure there was a lake, but what to do during the next days?

I had a look at a map and noticed the Harz was just one more hour away. We had liked our recent visits there. Especially Quedlinburg had impressed us. So we booked another hotel night there and stepped on the gas.

What a marvelous decision that was. The hotel was right in the historic center, the sun came out again and we ate well. We finished the day with a very entertaining guided walking tour, some hot chocolate with rum and a walk through the illuminated city. Wonderful.

Our last days we spent on a camp ground in Thale (still in the Harz mountains) which was really, really nice. We also took a hike along the Bode river where I used to hike with my parents when I was nearly thirty years younger.

So our “camping trip” consisted of maybe 5 or 6 nights in a tent. We seem to be more the camper van type. It's so much more flexible and less hassle than setting up a tent. We wouldn't want to do that every night again, which explains our many hotel stays. If it weren't so fucking expensive, we'd buy our own camper van.

Photos after the jump.